After a few days of hard work and lots of travel, we all needed a break. We were about to get one.

We had finished our final tasks at the school work site in Sablog in the morning. Our plan was to go to the Gulahuayco Girls’ school in the afternoon and stop for lunch somewhere along the way.

Lunch on the go

Our travels put us in the middle of nowhere at this time and there wasn’t a place for us to eat. Planning ahead, our guides had brought a lunch for us which we would eat in the car. I thought it would be something simple—a sandwich perhaps—and something easily portable.

I was surprised when they brought out the bowls and cutlery and started serving pasta. Much better than a sandwich and the warm food was appreciated given how cold it was due to our elevation. We were up in the clouds at 12,000 ft (3658 m).

After eating, we had an hour before we had to be at the girl’s club, so the group decided to just relax where we were.

We had quite literally just pulled off to the side of the road to eat lunch in the middle of nowhere. Surrounding us were meadows, pastures, farmers fields, and nothing else. There was a fence here and there, and some livestock, but that was it.

With nothing to do, this was effectively our moment of enforced relaxation. (Which reminded me of Frank Zappa’s album You Can’t Do That On Stage Anymore Vol. 1 where he talks about “Enforced Recreation”.) Sometimes you need to be told to stop and do nothing.

I’m not so good at that.

Most of the group took the opportunity to lie down in the field of grass and just talk with each other. For me—with nothing obvious “to do”—I wandered off in various directions in the fields.

In one direction, green pastures. Found there? Cows.

In another direction, green meadows. Found there? Sheep.

And in one final direction, following some tractor wheel impressions in the ground along a long wooden fence? Alpacas.

So, wildlife in all directions and surprisingly tame wildlife at that. I was able to get within 15 feet of a baby lamb before the mother decided to show some concern.

For photography, I tend to prefer prime lenses instead of zooms because they force you to move your body to get the shot you really want. That being said, on a trip like this I didn't have the convenience of bringing multiple prime lenses so I brought my all-purpose Sigma 15-250 mm zoom lens. The best thing about having such a huge range in one lens is I could switch between photographing a wide landscape and then get a number of close-up animal portrait photos easily.

Out here, all you saw were the mountains in the distance and the low clouds. There was nothing else to be heard or seen.

While I was walking around, a car drove up and dropped off a woman wearing traditional clothing at the side of the road. She proceeded to sit just off the shoulder of the road, waiting for something.

Maybe 10 minutes later, a bus—it looked like a common city transit bus—came down the road, stopped and picked her up.

To be clear, there’s nothing out here but the road and the field—no bus sign, shelter, anything. But apparently that spot was where you catch the bus.

What other things were here that we couldn’t see? 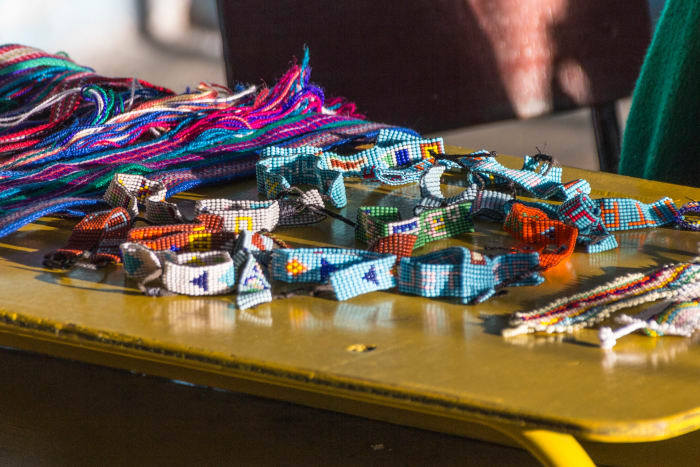