Our stay in Guamote had ended, and after taking the Devil’s Nose train ride in Alausí we were on our way to the city of Riobamba for the final leg of our trip in Ecuador.

We stayed at the Hotel Hacienda Abraspungo which is located just outside downtown Riobamba. We were staying here because it’s so close to Mount Chimborazo (18 mi/30 km away).

The hotel is secluded and lush, hidden behind high walls on all sides. You don’t feel like you’re actually in the city, and you have a good view of the mountain and the snow at the top—even if it is obscured by an array of power lines. That being said, it’s a gated environment which seems to be the norm. Coming from Canada—where we rarely see this—it feels a little weird to be walled off from everything else.

Given that that we’re travelling as a group, I’d expected to be sharing a room with someone else again. That’s how things have been so far but somehow, I lucked out today.

I got my own room!

My room had a king-sized bed, a fireplace, a bathroom that was larger than my entire room in the previous hotel, and a gigantic soaker tub that could fit a few people.

Was it the honeymoon suite? No, of course not. I’ve just been used to sharing a small room with single beds and a 3’ x 4’ bathroom for the past few days so it really felt that way.

This level of comfort was much appreciated after we’d acclimatized ourselves to living like students again for the past week. Another person in our group also got her own room. In hers she found 3 full size beds all to herself. (That might have been a little ridiculous.)

After the travelling, digging, and general manual labour of the past few days, being able to simply relax in such comfortable settings was welcome. (My apologies to the others in the group who still had to share a room!) I took this time to review photos from the past few days and write down some of my thoughts about the experiences so far. It was a nice peaceful break from the noise of travelling.

Although the hotel did have a wifi connection, it was spotty (to be charitable) and attempts to connect failed. In retrospect, that was a good thing as it prevented the real world from seeping back into this adventure.

As we waited for everyone to assemble for dinner, a few of us met up in one of the lounge rooms. We played billiards and had a drink on the patio while the sun set. Very civilized and enjoyed.

The hotel had a large dining room with various photographs, antiques and collectables hung everywhere. For the most part these followed the theme of climbing Mount Chimborazo (which I suspect is one of the primary reasons for tourists to be in this area).

Dinner was quite good. I had a pesto pasta dish which, like every other food experience we’ve had in Ecuador so far, was great. I’m typically a very picky eater so I’ve been surprised how much I’ve enjoyed all the different food I’ve had so far. (No, pesto pasta is not Ecuadorean, nor a surprise for me—I wanted something simple and basic today.)

I would have loved to stay here for another night or two, because it was such a comfortable break. It probably helped that there weren’t a lot of other people staying here while our group was present. We really felt like we had the place to ourselves.

With one exception… the wildlife. Roosters and ducks made their presence known early in the morning. Time to wake up and climb Mount Chimborazo! 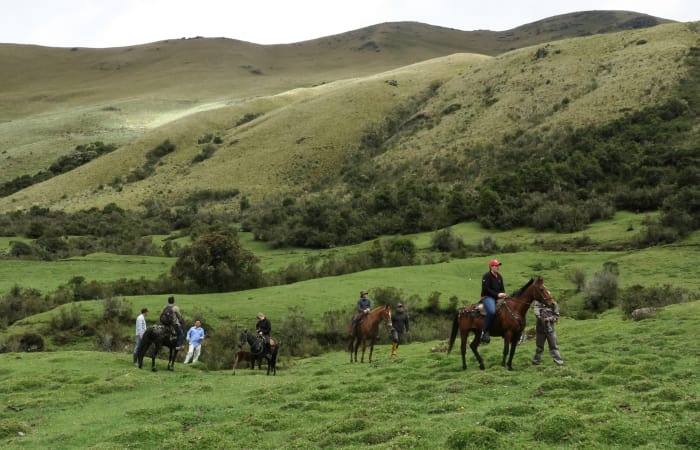