Helping to build a new school was the main reason our group was in Ecuador. We knew only a few things about the trip. We'd be one of the first groups to help, and the school was in the remote village of Sablog at a very high elevation. We didn't know much more than that!

Our home base for the majority of the trip was the town of Guamote, about a half hour drive from Sablog. To get there, we drove along a number of winding switchback roads up the hillside. Sablog was a ‘blink and you’ll miss it’ sort of area. I'd be surprised if there were more than 200 people there. I couldn't find a single map that even had it labelled.

There was an existing small school building at the building site, and a long wall that separated the school from the roadside. Surrounding it was simply the rural landscape and a farm house here and there. At most there were a handful of other houses but the area mostly looked like an uninhabited field. This was our introduction to the village of Sablog.

School is in session

As we walked through the gate from the road we could see the entire school site. A playing field was being used by kids to kick a soccer ball around. On one side was the existing school building (two small classrooms and a storage room) and on the other a new building was under construction. The far side of field was bounded by a hill with a steep drop, providing a view of the hilly landscape beyond.

School kids were playing in the field and walking around. All of them were wearing their school uniform: bright red shirts and/or ponchos with black pants.

On our first visit to the site, we were introduced to the kids and teachers at the school. They welcomed us by singing us a song. Our group… made a valiant but embarrassing attempt to respond with a song as well. (And we'll never speak of that again.)

After meeting the kids and teachers, we met the construction foreman who explained the different tasks we'd be helping with. We were going to help with the building currently under construction as well as help with the foundations for a new building to be built beside it.

Specifically, we were going to be:

It didn't sound too hard, until we learned how we'd be doing it.

It was important for our group to help by using local tools and techniques. The reason was fairly simple: we're only here to help for a very short time and the locals will be continuing the work when we're gone. We need to work their way and not the other way around. So that meant no power tools! Everything would be done by hand.

It turned out to be a very revealing lesson about how dumb we can be sometimes. We'll get to that later…

The group split up according to the tasks we were given. A partner and I started with the task of cutting rebar. This first required hauling a number of 30' lengths of rebar and dragging them to an area for cutting. Our job was to cut them down to 5' lengths.

The cutting tool was a handheld hacksaw. We had no bench, table, or support of any kind… Just the hacksaw, a measuring tape, the ground, and some bricks. We used the bricks to prop the end of the rebar off the ground, measured it and then started cutting away. It took a bit of effort to cut through solid rebar with the hacksaw.

We repeated this for our first few bars until our dumb brains started to realize—very slowly—we could save some time. We were measuring each time. But once we cut a correct length, we could just use that as the guide for the next cut. Why measure each time? (And we made sure to keep using that initial 'good' cut length so we didn't end up slowly changing the length over time with each cut…)

That was a very small win. The next realization came not because we were thinking, but because we were tired. We'd been cutting for half an hour and our backs, knees and arms were starting to feel it. We realized that we didn't need to cut through the entire bar. Instead we could cut half way through and then easily bend and snap the piece off. That meant we only had to cut half as much as we had been—victory!

Unfortunately this realization—that a brute force approach wasn't the right one—was forgotten almost immediately after the rebar session. We'll get to that in a bit.

By now we had a fairly efficient process and we could alternate roles—one person measuring and holding for stability, one person cutting—and it was feeling good. We cut almost two hundred lengths of rebar in about 2 hours and then it was time to switch places with one of the other groups.

Our next task? Digging the foundation holes for 3 footings.

The new school consisted of 2 buildings. The first one was a small 2 storey building with concrete block walls, and they were already starting to put the roof on. (This was why one of our groups was painting the roof tiles.) The second building hadn't started yet and that's where we came in. We were going to dig the foundation holes for the footings.

It turns out that there was a smart way to approach this problem. But first, let me explain how we did it (poorly).

We had 6 people to work on the 3 holes. There were some skimpy shovels and a single pickaxe to share between us. The pickaxe itself weighed maybe 15 lbs. After repeatedly lifting it above your head and smashing it down to attack the solid ground, it got very, very heavy.

One of the big problems was that the earth was so compacted that we could barely make a dent. After 2 hours we had dug down perhaps 1 foot in depth. Very slow. Very difficult. Very exhausting. (Especially at this elevation!) The hole digging was not going well.

Eventually we had to keep taking longer and longer breaks and eventually switched positions with the group that was completing the next phase of the rebar—bending it into shape.

All of the rebar lengths that we had cut previously now had to be formed into square shapes. These would be used in the formwork for concrete columns. To bend the rebar correctly we used a jig that was a piece of wood with steel pegs nailed into it. This gave us the correct positioning and lengths to bend the bar at right angles (using body weight) to form the correct shape.

This was physically easy (just lean your body back while holding the bar) and as long as you didn't try and use arm strength, not tiring at all. You had to be careful that you didn't bend it out of plane, but it wasn't a real challenge. Compared to digging the foundation holes, this was relaxing.

And that's what it needed to be, because it was soon our time to return to digging the foundation holes again.

Finishing off our first day

When we returned to the digging, we tried to find other strategies to dig deeper or faster but we just couldn't find a way. At the end of the day, we gave up, around 2.5' deep. It felt like the progress was minimal. Surely there had to be a better and more effective way to do this. (And there was, which we'd learn on our last day.)

The other group had been painting the roof tiles. The tiles were stacked in piles and the group would paint a batch, lay them out on the ground to dry, and then carry them to the roof. For them, the painting was the easy part. The hard part was then carrying the tiles up 2 flights of stairs to the roof of the other building. Basically, they were doing stairmaster exercises while carrying weights at 11,000 ft elevation.

After this first day, we returned to our home base (Inti Sisa in Guamote) and collapsed. Dirty, sweaty, exhausted, but with a great sense of accomplishment with the feeling that we were helping make a difference.

We returned a few times later in the week to continue our work.

Really, it was just more of the same, with the same level of ability and progress (i.e., minimal!). On the last day, some of the local workers stood by and watched us toil on the holes. When we were done, one of them—probably in his mid 50s—sauntered over to show us the proper technique.

Mostly he demonstrated that we were using brute force instead of thinking. (There's a message in there that applies to so much of what we do every day.)

He'd somehow find a place to wedge in part of the pickaxe, and then lever it in such a way as to dislodge a large clump of clay/soil (probably 1.5 cubic feet). He could then remove that entire piece all at once. Using this approach he dug the hole down about another 2 feet in 20 minutes by himself.

We had tried similar things but somehow he was able to find the right spot to anchor and each time just lever out a large boulder. Minimal effort. Maximum result. We were all feeling rather sheepish at this point. Our dumb brains had taken the brute force approach and failed miserably.

If nothing else, that was one of the key lasting messages from this experience—stop and think before doing. It's not that we haven't heard it before, but seeing it in practice against your own (seemingly rational) actions was instructive.

In the end, we played with the kids, helped move the school build forward at least a bit, thoroughly exhausted ourselves in the process, and learned something new. I'd call that a success and a solid feeling of accomplishment. 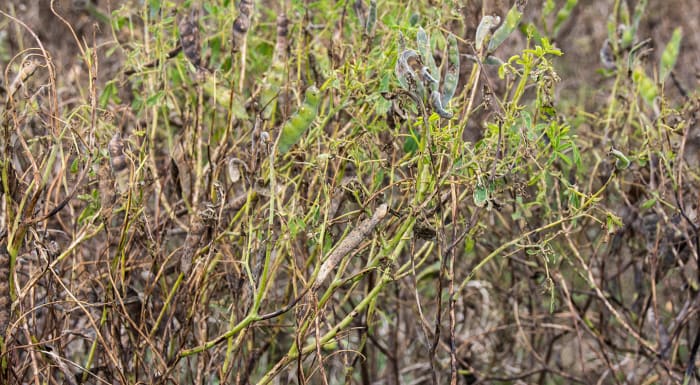