Education is critically important. I think anyone would be hard-pressed to argue against that. Yet in many parts of Ecuador, especially those like Chimborazo province which has a large indigenous population (~38% indigenous), education is in no way guaranteed. Today we were here learning about some of the initiatives aimed at improving that.

Access to education disproportionately affects young girls the most because they're often forced to be responsible for looking after the home and performing household chores. Their opportunity for education is often restricted which limits the possibility of income and independence. This is something we tend to take for granted in North America.

Today we visited the Gulahuayco girls' school. It's aimed at giving young girls an education which then helps open up income opportunities. It's a fairly simple proposition: education leads to self sufficiency and opportunity.

The school was in a remote area, maybe 15 km east of Alausí, surrounded by fields and farms. Google maps doesn't even show any of the roads in this area. The girls who attended this 2-classroom school would walk the 1 or 2 hours from their home to this location.

Why it was so important

As a kid, we would joke about how our parents exaggerated how far they were from their schools, as if they walked an hour to school, uphill both ways. For the students of this school, That's actually the reality (minus the uphill both ways part).

So what did they learn here? There were the obvious things that we'd consider the basics: reading, writing and math. But there were also things you wouldn’t expect. These included basic safety, sanitation and health. A lot of this we don't learn about in North America because we have municipal services that hide the need to understand it (sanitation, health).

The girls took some time to talk to us about how having this school was a positive change in their life, and how it affected them directly. They were very aware of the opportunity it provided and were grateful for it. The girls were young (10-14 years old) but acted with a maturity I didn't expect.

At the school they also learned how to make various crafts that can be sold. Having a source of income provides additional independence for these girls, which in turn provides further justification for getting an education.

Today they were going to share and teach us how to make some of these crafts.

They sat us down and gave us a collection of tiny beads, a needle and thread. Our goal was to make a small beaded bracelet, following a very specific pattern of loops to ensure the beads stayed tight together. For people that have done this in school, it was fairly easy. For me (never having done this before)… well, let's just say I made a total mess of it. Even after some of the girls sympathetically tried to fix the mistakes I'd made.

There were a number of other crafts they demonstrated while we were there.

They made ribbons and belts from textiles using hand tools to ‘weave’ them together. Like the beads, this was a long tedious process. To make larger things, they had a small loom-like contraption they'd sit on their lap. This would be used for making things like scarves.

All of the crafts involved long and repetitive tedious manual effort. For hours of work they'd make a single item that they could sell for perhaps a dollar or two. Let that sink in for a bit… If you ever think you have it hard, think again.

It starts to put into perspective just how much we take for granted.

Our activities at the school were finished near the end of the day. It was now time for our drive back to our home base at Inti Sisa in Guamote and the drive coincided with the sunset.

Normally I'm not a huge fan of sunset photos because they're fairly easy to shoot and they usually don't have any interesting subject matter beyond the colours themselves. Now, I'm not saying the photos I took here were any different (and that's my fault as the photographer). But what I remember was driving back, seeing the sunset, and realizing we were at the same elevation as the clouds.

For that reason alone, the sunset provided a silhouette of the landscape directly against the clouds, with the mountains behind. That was a type of sunset I hadn't personally witnessed before so it justified taking a bunch of photos.

So yes, it's a case of fairly generic colourful sunsets, but at this elevation the drama was more powerful and that's how I remember it. 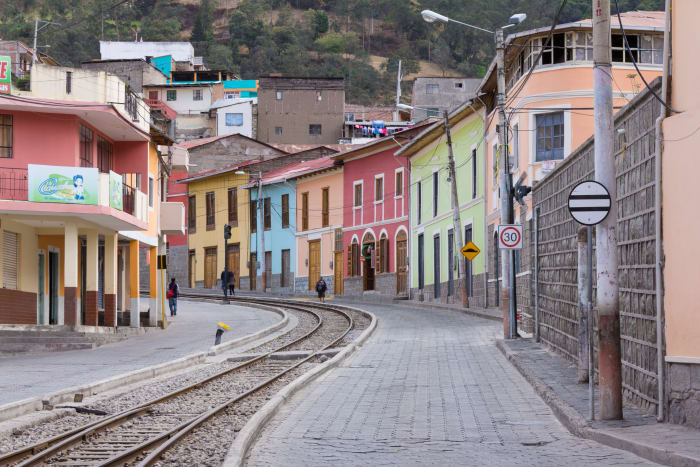