We arrived in Alausí to take the Devil’s Nose (El Nariz del Diablo) Train Ride down to Sibambe. As we approached Alausí by car, two things were clear:

That’s a little concerning for me and sets off the alarm bells. Is this just going to be a tourist trap?

Stores catering to tourists were located directly across the street from the train station (see the clothing store photo). Coffee shops, ice cream vendors and similar shops were also in this area around the station. While not entirely surprising, it reinforced the tourist nature of the excursion.

While our guide asked about the train schedule, we had a few minutes to wander around the nearby streets. The town is on the side of a hill, so the streets climbed up from the main plaza at a steep angle. The main plaza itself had lots of outdoor seating beside the tree-lined boulevard.

Most of the buildings visible from the train station were painted in various bright colours as they extended off into the distance. The train tracks themselves follow the road into and through the town.

One other noticeable element in Alausí was the giant statue that overlooks the town. It’s visible on the drive in and can be seen from most places. The statue itself is perched on a large podium elevated high above the surrounding buildings.

Unfortunately, it's not close to the train station.

Race to the statue

Our guide informed us that the train would depart in 25 minutes. In his mind, that wasn’t enough time for the group to get to the statue and back. He recommended we grab a coffee at the café and enjoy the wait.

I had other plans. I wanted to see if I could make it to the statue.

I set the stopwatch and immediately started walking quickly in the direction of the statue. I wasn't exactly sure how to get to my destination, but I knew I’d have to turn back once the timer reached 10 minutes.

Taking the most direct path I could see I followed the streets in the direction of the statue. Every once in awhile I’d catch a glimpse of the statue to reset my bearings.

As I got closer to the hill with the statue I could see that there was no direct way up. There must be a path, road or stairs to the side.

I found a steep road that climbed up around the back of the hill. I was really starting to get tired at this point.

I finally reached a large staircase. I was making good time—9 minutes elapsed so far—but I was exhausted. Elevation, adrenalin, the rush to not miss the train—they all added up.

I said it was a large staircase, but… it’s not. It’s just 2 flights of stairs, but it felt huge at the time. I was winded and had to take a break after the first set. (That tells me it’s time to start exercising again!)

At the top—the statue. I made it! (But I only had 3 minutes before I'd have to run back to catch the train).

It was a surprise to learn that the entire statue was covered in a mosaic tile pattern. This wasn’t something you could easily notice from a distance.

Also on the top of the hill is a building (information centre? gift shop?) and the statue rests on a small building connected to it.

Unfortunately the time constraints I was under meant I didn’t have a chance to enter the building or to really get a good photo of the statue. Still, it was worth the rush because otherwise I wouldn’t have seen any of this.

From up on the hill, you get a great view of the entire town of Alausí. I could see all of the winding streets, various buildings, and the entire town growing up the side of the hill. The train station was also visible and from here I could map a different route back. I bet this would be a great place to see the entire town at night. I only wish I’d had the option to experience that. (Next time?)

Back to the station

At this point, my time was up and if I wanted to make it back for the train I had to leave. I was returning as quickly as I could, but I did manage to stop for some extra photos on the way back to the station.

This caught me off guard—two kids playing on the sidewalk outside a butcher’s shop. And then you realize there’s a gutted pig hanging just inside the store. The kids are totally unfazed by that. (Which makes sense in a culture where they’re exposed to this all the time.)

In North America, most people don’t see this. Some are horrified by the idea and want to pretend it doesn’t exist. But that’s the reality of how we get meat. In any event, I thought this scene was interesting and couldn’t help taking a photo.

The second thing that caught my eye was a door in a white wall, because it reminded me of Venice. Let me explain…

Many years ago I was in Venice, Italy for a few days. The thing I remember most about being there and exploring the city was… the doors. Each home had a completely different design and unique variation of the common door.

That variation isn’t what I found in Alausí but there still were a few that stood out. When I came across this white-washed wall punctured solely by this hand-carved creation, I couldn’t help but take a photo and remember Venice. 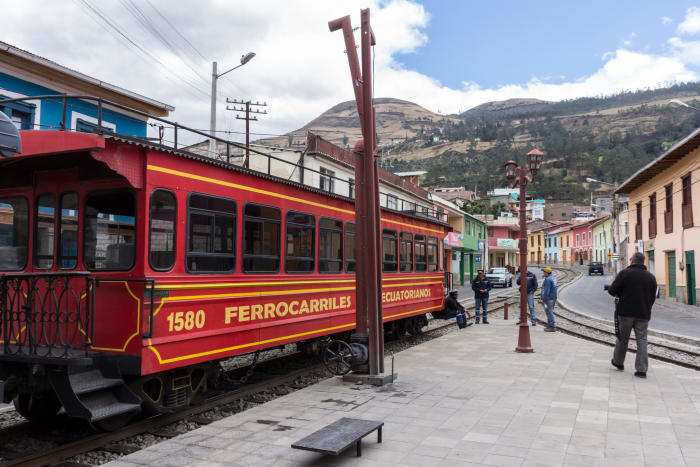 Alausí, Ecuador Riding the Train Down the Devil's Nose