Our Ecuador travels began by skirting around Quito and heading directly for Guamote. We were fully in the more rural areas for a week before even setting foot in the dense urban jungle of Ecuador's capital city. And that perception of density was likely amplified by being out in the rural landscape for a week straight.

When we were leaving the airport, we stopped at a rest area on the road above Quito. This provided a good view of the breadth of the city, nestled into the mountain valley landscape. From this vantage point it truly was a concrete jungle with a consistent level of built-up forms. It was hard to perceive landmarks or structures that would provide reference points for getting around. (Reality on the ground of course is much different.) It was also interesting to clearly see how the landscape shaped the growth of the city—visibly long and bounded by the sloping hills.

At first glance, Quito reminded me very much of a European city. It was similar in terms of the layout, structure, density and general feeling of life at the street level. I'm sure a large part of that is the difference between cities that grew in the age of the automobile versus those that predated it and were designed for, well, people.

The crowded confusion that seemed to describe Quito when seen from a distance didn't occur once you were at street level. In that way it felt very much like any European city with streets lined with 4 or 5-storey buildings and shops.

It was a pedestrian-friendly city, which meant there were large areas for walking, open plazzas and wide people-only paths. (At least this was the case in the area I was exploring.) You will however find yourself climbing up and down hills everywhere because the city is built in a valley.

After our walking tour, one of our Me to We guides recommended sitting down and grabbing a drink to relax. Our guide lived in Quito so he knew the non-touristy places to go. It turned out to be a secluded rooftop patio on the top of a hotel, and there's no way any of us ever would have found it without him.

We rang the buzzer on a non-descript door (which turned out to be the entrance to a hotel—I didn't see signage anywhere). Once inside there was an open interior courtyard which was lush and peaceful. But this wasn't our destination.

We bought some drinks at the hotel reception desk (which were ridiculously cheap—about one dollar per drink) and then followed our guide up the stairs. Once we were at the third floor we followed the hallway around a number of corners and found a small set of stairs that went up to an empty hallway. At the end of that? More stairs—tighter and steeper—more like a ladder than stairs.

A little further and then we had a final set of stairs that took us outside to the rooftop. We were above most of the other buildings and high enough that we could look over the entire city and the valley we were within. We had it all to ourselves and it was quite a treat.

Sitting above Quito on a rooftop patio having a drink and enjoying the peaceful view. What a fantastic way to close out this adventure.

During our walking tour we visited the plaza in front of a convent—the Guapulo Colonial Church and Convent. While we didn't go into the convent itself, we did visit the gift shop below. It was no ordinary gift shop.

Walking in through the front door, you saw everything you'd expect to find in a gift shop: jewellery, photos, postcard, local chocolates, etc. Moving to one of the side rooms you'd find a number of art pieces for sale, along with a small corridor. And that's where it got interesting.

The corridor stretched on. And on, and on. As you explored deeper into the corridor you would sometimes find other small rooms with their own collections of art, paintings, and sculpture. Some of the corridors themselves were lined with pieces.

The corridor would branch at times and you'd have to make a decision which way to explore (and try and remember which way you came from!). It was in some ways a maze, and that made it all the more interesting.

Remember this is all happening underground and it all started from the gift shop. The paths and corridors were much longer than I'd expected—they just seemed to keep going on and on, revealing new corridors and rooms with new pieces to view.

Fortunately not too many people seemed to have found this part of the store because the corridors were very narrow.

It was clearly part of the ‘store’ because the signage reaffirmed that and everything was on display and priced. It was a unique way to use what otherwise might have been considered dead space, though it didn't feel like many people were curious enough to explore the tunnels to see what they revealed.

Our group headed to Independence Square (Plaza de la Independencia) where we were to have a guided walking tour of the nearby area. Surprisingly, they had an armed guard escorting us during our tour and warned us about theft. Is security or theft really that much of a concern in Quito? It certainly didn't feel like any more dangerous than Rome, London, Madrid or any other large European city I've been to. (Though if I'm being honest, I left the dSLR back in the hotel room and took the Canon G15 with me instead.)

In many ways the city's architecture reminded me of Madrid, which isn't a surprise given the Spanish roots in Ecuador.

One of our first stops was the famous Church of the Society of Jesus (Iglesia de la Compañía de Jesús). Virtually every surface inside the church is covered in gold leaf. It's overwhelming and hard to believe. I'm divided between whether it's a thing of beauty or tackiness. It's definitely an overt display of wealth which seems somehow inappropriate in context of a church.

Unfortunately, photography was strictly disallowed. So while I have no photos of my own to show from this location (other than the exterior details shown above), I'll point you to the Compañía de Jesús wikipedia site which has many interior photos.

We found the tourist restaurant

Our food experiences in Ecuador had been fantastic. Even I, a picky eater, had virtually nothing to complain about. Unfortunately, our final dinner didn't match the standard that had been set throughout the trip so far.

Unfortunately I didn't pay attention to the name of the restaurant—so I can't warn you away! All I remember was it was within 2 blocks of the Swissôtel Quito where we stayed.

Do you know how sometimes you walk into a restaurant and you can tell that it's designed for tourists and not locals? There is the feeling of inauthentic replica decorations, a special multi-course menu, and maybe even photos of food on the menu. That described the place we went.

Now, I wouldn't characterize the food as awful. But I think the best way to describe the experience is one that lacked care or detail. It was the ‘tourist special’ more than anything else. It was… average.

And you know what? I'm quite ok with that being the sole source of disappointment, because this trip was above and beyond one of the most amazing things I’ve had the chance to experience. So let's forget about one mediocre meal.

On our last day, we had the morning to explore before heading back to the airport. The night before, we had heard about a craft and art market about 1 km from the hotel. A few of us set off in the morning for a visit.

There were two parts to this. The first was the market proper, which was a set of permanent stalls with vendors crowded into them selling mostly jewellry, clothing, textiles and fabrics. For people that wanted a sweater, poncho, or blanket, there was lots to see.

I couldn't help but feel that this was primarily aimed at tourists (e.g., us!). I didn't really see anything that I hadn't already seen elsewhere in smaller towns and stores around Quito.

The more interesting find was the second part: an art sale and exhibition happening in the park a few streets over from this market. Possibly one hundred vendors had stations setup selling everything from musical instruments to food to art pieces.

The art ranged from assembly-line landscapes to unique modern pieces that were fascinating. I’m not sure if we just happened to be here on a special day when this was taking place or if it happens regularly, but the calibre of the work was quite good. It wasn’t mass-produced tourist fodder.

Back to the hotel

After the market and art exhibition, it was time to return to the hotel (we were leaving for the airport in 2 hours). This was my last chance to wander the city and explore so I didn’t want to return quite yet. I still needed to get a little lost and walk around the streets.

What I hadn't realized walking to the market is that our route had followed the length of the valley that Quito was located in. Because as soon as I started travelling outside that path I found myself climbing up steep hills almost immediately.

And they got steep—very steep. When you put the camera level to the road and photograph the buildings it becomes very clear.

This also reminded me quickly that I’m still at a very high elevation (Quito is situated at an elevation of 2,800 m / 9,186 ft). Climbing up and down these streets was definitely harder on the body than I expected. I bet I'd get in shape fairly quickly if I was living in Quito.

And sadly, with that, our trip was over.

We were heading back to the airport for the long flight back to Toronto (via Panama). I think all of us were both weary and sad, having experienced some incredible adventures over the past week. 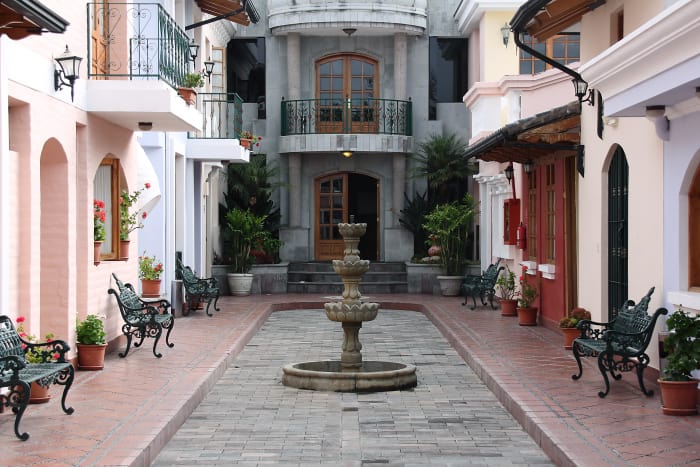