Today’s activity was to learn how to harvest chochos (known locally as tarwi in the Quichua language). Angelita, the woman who ran the Sumak Ahuana women's co-operative we visited yesterday, took us to her father’s field to help him.

I’d never heard of chochos before and had no idea what they were or what they looked like. Wikipedia tells me that chochos are a high-protein bean that have grown in the Andes for over one thousand years. That high protein level probably explains why they’re such a versatile ingredient used in many soups and salads.

Our group leader pointed out that we’d already consumed chochos in the meals we’d had in Guamote over the past few days. I probably confused them for chickpeas.

They're clearly something not very common in North America but it may be because they're not referred to as chochos here. Using the more common lupini beans makes it much easier to find them. When I search on Amazon.com for chochos, I find this one listing for Valles Andinos Chochos Lupini Beans and even then it only has a single review. But if you search for lupini beans you'll find much, much more. Maybe they're the same thing, maybe not.

After about a half hour’s drive we stopped in what seemed like the middle of nowhere, and saw Angelita’s father and his truck waiting on the side of the road. Our understanding was that from here he’d take us to his field, the plot he’d owned for decades.

Angelita’s father was in his late 70s. He had worked the fields all his life and continued to do so. His attitude was that ‘working keeps you young’ and he couldn’t imagine having idle hands.

I’m sure he was more than a little amused to see all of us barely competent foreigners gawking at his daily routine. We were about to try our hand at one of the things he’d been doing all of his life.

At this point he grabbed some bags from his truck and led us off into the field. Chocho harvesting time was about to begin!

We weren’t sure where we were going and I thought it must be somewhere further away, beyond all the dead brush we saw immediately in front of us. I didn’t see anything yet that looked like a harvest-ready field.

That dead brush in front of us turned out to be the chocho plants. (Are they plants or vines? I have no idea.) I initially thought they looked like sparse hedges that intertwined with themselves. Like out of control weeds that had gotten too thick for their own good. Certainly not ripe ingredients for picking.

Among the branches were dark brown or black pods, sort of like pea pods but with the texture of the ‘helicopter’ seeds that fall from a maple tree.

These pods were the chochos.

If you break the outer shell, it revealed the white/beige beans contained inside. Each pod would have 3 or 4 beans inside. Our job was to pick the pods off the plants one by one and put them in the bags we had brought with us.

Our group spread out and started picking the pods and filling our bags. It was very repetitive—and the source of a few back-aches—but also relaxing. Some of the pods were already very dry and had split already, but anything that had the beans inside was worth collecting. After stripping a plant, we stomped it down to the ground so it was clear which plants were done and which remained.

An hour or two later, the group of us had filled maybe 10 bags. The bags were large—similar in size to a 30 gallon garbage bag—we collected a lot of chochos!

Angelita’s father took the bags back to his house. There, the beans would be removed from the pods and soaked in water for a number of days to prepare them.

There were two things that kept going through my head as we drove away from the field today.

Most importantly, the experience reinforced how grateful I should be for how easy a life I’ve lucked into. Next time I feel like complaining about something, I should remember that I could be picking chochos out in the field all day, every day. 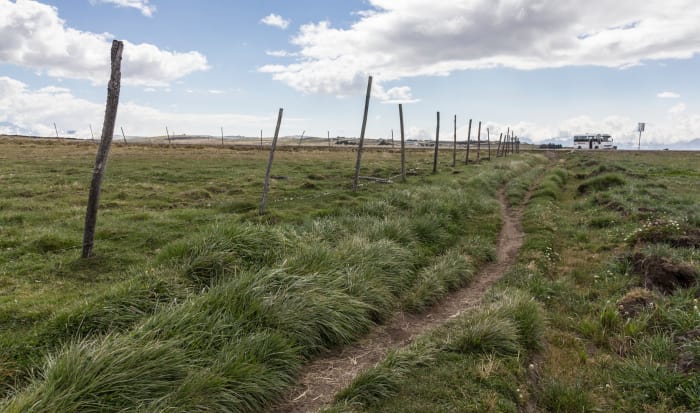